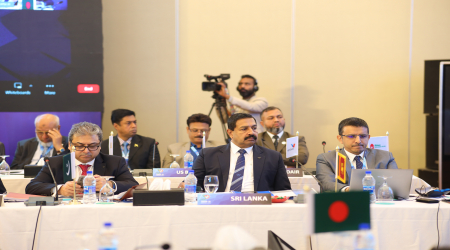 The ICAO which was born one year before the establishment of the United Nations in 1945 is currently identified as the UN body specialized in international civil aviation that plays an unique role in helping States to cooperate and realize a truly global rapid transit transport network at the service of all mankind. As the UN and majority of world nations have now adopted Agenda 2030, embarking on a new era in global sustainable development, the importance of aviation as an engine of global connectivity has never been more relevant to the Chicago Convention's objectives to look to international flight as a fundamental enabler of global peace and prosperity.

The ICAO which commenced business with the participation of 52 Member States in 1944 has a total of 193 Member States of the world as at present. The main administrative framework of ICAO consists of the Assembly, Council and Secretariate. The supreme body of the ICAO is the Assembly consisting of all Member States which meets once in every three years under normal circumstances at its headquarters located in Montreal, Canada for the main purpose of approving the triennium work programme and the associated budget; electing the Member States to be represented on the Council; examine and take appropriate action on the reports of the Council and decide any matter reported to it by the Council.
The Council is the governing body which consists of 36 Member States elected by the Assembly Session for a period of three years. In the election, adequate representation is given to States of chief importance in air transport, States not otherwise included but which make the largest contribution to the provision of facilities for international civil air navigation and, the States not otherwise included whose designation will ensure that all major geographic areas of the world are well represented on the Council. The Council which is headed by the President, has numerous functions, notable among which are to submit annual reports to the Assembly and carry out its directions; discharge the duties and obligations emanating from the Chicago Convention and adopt international Standards and Recommended Practices (SARPs) relating to wide spectrum of aviation matters which form part of the Chicago Convention as Annexes.

The Secretariate which is headed by the Secretary General has five main bureaus of different aspects of civil aviation to discharge the administrative, planning and operational functions of the ICAO at the direction of the Council. The Secretariate has seven Regional offices accredited to Member States located at different parts of the world, for the better coordination, cooperation and consultation in the implementation of ICAO work programmes regionally.
The vision of ICAO is to achieve the sustainable growth of the global civil aviation system and in the process of achieving its vision, ICAO is embarked on a mission to serve as the global forum of States for international civil aviation; develops policies and Standards; undertakes compliance audits, performs studies and analyses; provides assistance and builds aviation capacity through many other activities in close coordination cooperation of its Member States and stakeholders.

Sri Lanka acceded to the Chicago Convention on 1st June 1948 and became a Member State of the ICAO. Accordingly, Sri Lanka has undertaken a compelling obligation to ensure local implementation of ICAO policies and SARPs for operation and maintenance of safe, secured, efficient, regular, economically viable and environmentally responsive aviation industry in the country. This international obligation of the State had broadly been incorporated in the country’s legislative framework in terms of the Air Navigation Act No. 15 of 1950 until it was replaced by the Civil Aviation Act No. 14 of 2010. Section 2 of the Civil Aviation Act which states “The Articles of the Convention relating to safety, regularity, efficiency and security of civil aviation as are specified in the Schedule to this Act, shall govern all activities relating to civil aviation within the territory of Sri Lanka”. During the audit conducted by ICAO in 2018 to ascertain the compliance of the State in the local implementation of SARPs which are over 12,000, Sri Lanka has demonstrated 88.4 % of effective implementation of them ranking number one amongst States in South Asia and number six amongst States (42) in the Asia and Pacific Region. It has helped the country to send out a very positive signals to the members of both local and international community that air travel in Sri Lanka is well regulated and maintained safely conforming to the applicable world standards. As a country which depends largely on air transport for expeditious international connectivity, tourism, business promotion and foreign investments, effective implementation and consistent maintenance of International Standards and Recommended Practices (SARPs) in the country are important to develop confidence in the members of public for use of local air transport services for both domestic and international travel.

Until the end of 2019, the world international revenue traffic carried by airlines on scheduled services has been growing steadily with an average rate of over 7 % giving a strong signal that the volumes of overall traffic would be doubled in 15 years demanding the States’ attention for capacity expansion and innovations to cope with the projected growth for retention of the inherited speed in air travel and impressive safety records. Although safety and security were the foremost priority in civil aviation, the need to pay same or even higher attention for public health was not that evident until the emergence of novel corona virus pathogen (COVID-19) in China in late December 2019 and its worldwide propagation as a global pandemic withing a fairly short period. Even the World Health Organization (WHO) was somewhat late to identify the potential harmful effects of coronavirus when it was originated in China and declaration of risk levels to Phase 5 indicating the novel coronavirus outbreak a public health emergency of international concern (PHEIC) with highest level of alarm, to enable the countries in pandemic preparedness and response planning. According to WHO, as of date, over 63 million people have been affected by CORVID-19 in 220 countries resulting in over 1.4 million fatalities. Although the annual growth of air transport industry has been adversely affected at different times in the past due to various factors such as fuel crisis, unrest in the middle east, 9/11 terrorist attack, and health pandemics such as SARS, MERS, Zika, Ebola etc, the resultant effect of them was not as much as the adverse impact caused by CORVID-19 which is unprecedented. It is evidently portrayed in the following chart

When compared of the figures of 2020 with 2019, the ICAO predicts volumes of air passengers (both international and domestic) would be reduced by 59% to 60%. The Airports Council International (ACI) which represents international airports of the Globe estimates that international airports would face a loss of over USD 104.5 billion airport revenues. The IATA which represent world’s international scheduled commercial airlines estimates a decline of 54.7% of Revenue Passenger Kilometres (RPKs, both international and domestic) resulting in a financial loss of USD 389 -391 billion. The CANSO, the world’s Civil Air Navigation Service Provider Organization predicts a loss of USD 11 million to organizations providing Air Navigation Services. The World Tourism Organization (WTO) estimates a decline in international tourism receipts of between USD 910 to 1,170 billion with 100% of worldwide destinations having travel restrictions and also a fall of global merchandise trade volume by 9.2% . As per the International Monetary Fund (IMF) and World Bank, the projected -4.4% to -5.2% contraction in world GDP would occur in 2020 which is far worse than situation during the 2008–09 financial crisis. Based on an analysis by Oxford Economics, the International Air Transport Action Group (ATAG) states that Job losses at airlines, airports and civil aerospace companies alone could amount to 4.8 million by the beginning of next year, which is 43% reduction in employment from levels before the pandemic.

The adverse effect of COVID-19 pandemic has been such that bustling hubs of activities that were taking place at different air transport establishments in spectacular, charismatic and friendly business environment have been turned into eerily empty spaces with numerous cordons being established for social distancing making air travel somewhat inimical, which is detrimental for its healthy and sustained growth. The biggest challenge is to change this situation soon and create confidence in the minds of air commuters that air travel is safe in all aspects including security and public health. Since the disease is still spreading in the world and practical, reasonable and proven remedies either for prevention or recovery are yet in the infancy stage, it is premature to predict as to how soon aviation industry would regain its usual growth trajectory. In this respect, ICAO is currently working with other agencies under many different scenarios in order to reflect the very uncertain nature of the current situation and the rapidly changing environment. The actual path will eventually depend upon various factors which include but not limited to the duration and magnitude of the outbreak and containment measures, availability of government assistance, consumers' confidence and economic conditions. In this respect ICAO has done an analytical focus which revolves around two scenarios as follows indicating possible paths or consequential outcomes out of many. Each scenario considers 4 different paths considering differentiated terms of supply (output) and demand (spending) as shown in the diagram below.

Informal classification to describe different types of recessions are as follows : • V-shaped: normal shape for recession, a brief period of sharp economic decline followed by quick/smooth recovery • U-shaped: prolonged contraction and muted recovery to trend line growth • L-shaped (depression): long-term downturn in economic activity, steep drop followed by a flat line with possibility of not returning to trend line growth • W-shaped: a double-dip recession, “down up down up” pattern before full recovery • “Nike swoosh”-shaped: bounce back sharply but blunt quickly.

In this context, the challenge of the air transport industry and the States is to cope with current situation in line with health recommendations given by WHO and be ready to face the growth once the industry returns to normally. In this connection, it would be vital for the States to work hand in hand with close coordination and cooperation with ICAO and other international organizations engaged in air transport activities, as the COVID-19 crisis has embraced the whole world and not confined to internal borders.
The International Civil Aviation Day falling on 7th December may be an ideal occasion for States to reaffirm its continued commitment to conform to ICAO policies and SARPs for development safe, healthful, secured, efficient, regular, economically viable and environmentally responsive air transport network covering the entire globe for the common good of humankind under the leadership of ICAO, which is a body of World States.