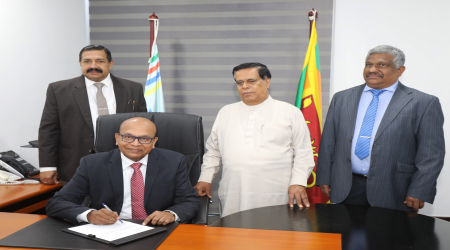 This is to inform all aircraft operators operating in Sri Lanka airspace (Colombo FIR) that ADS-B (Out) service is established within the designated volume of airspace named, Colombo Exclusive ADS–B (Out) airspace (as mentioned below), with effective from 10th September 2020.

Plans are in place to increase the volume of the exclusive airspace by lowering the lower limit of the vertical extent in a phased approached. Accordingly the aircraft operators will have to equip their aircraft suitably in order to operate through the airspace expected to be designated as exclusive ADS-B airspace where non-ADS B aircraft will not be allowed. The following is a short description of the ADS-B for the general information of those who are interested and concerned.
ADS-B technique relies on aircraft or ground vehicles broadcasting their identity, position and other information derived from on board systems (Global Navigation Satellite System etc.). This ADS-B (out) signal can be captured for surveillance purposes on the ground stations or on board other aircraft in order to facilitate airborne traffic situational awareness, spacing, separation and self-separation (ADS-B In).
ADS-B is automatic because no external stimulus is required; it is dependent because it relies on on-board systems to provide surveillance information to other parties. Finally, the data is broadcast, the originating source has no knowledge of who receives the data and there is no interrogation or two-way contract.

ADS-B for the first time allows pilots to see what controllers see: other aircraft in the sky around them. Pilots are also able to see – and avoid facilitating an increased situational awareness which would enhance the safety.
Improved accuracy, integrity and reliability of satellite signals over traditional Radar technology will allow reduced separation between aircraft this will increase capacity in the nation’s skies.
ADS-B ground stations are so much easier and cheaper to install than Radars; hence the gaps of no radar coverage, caused by line-of-sight issues are covered by ADS-B providing greater coverage.
Reliability and consistency on satellite signals instead of ground-based navigation aids permit more direct routes, optimum flight levels resulting less fuel burn, less emissions hence less impact on the environment.

The GPS-based surveillance enables more precise tracking of aircraft compared with the current radar sweep rates. Aircraft tracking with ADS-B (Out) will have more accurate information about last reported positions, improving the ability to perform life-saving Search and Rescue missions.
ADS-B (out) will also reduce the risk of runway incursions. Pilots and controllers will be able to see the precise location of aircraft and properly equipped ground vehicles moving on the ground – even at night or during heavy rainfall.

The radar systems that support Air Traffic Control have their operational limitations. This is particularly acute in the provision of the ATC services in low altitude, remote and oceanic areas. Limitations in the current surveillance systems include unavailability of services in oceanic and remote areas and limited services during extreme weather conditions. Radars with large structures will also take up a lot of space and are expensive to install and maintain. ADS-B surveillance technology overcome the limitations of traditional radar systems and identify areas of improvements to enable seamless ATM operations.

IS 064 – Implementing Standard on Automatic Dependent Surveillance Broadcast out (ADS-B Out) Operations, issued by CAASL lays down requirements for the performance and interoperability of surveillance across the Colombo airspace.
Ref. AIP Supplement 02/2020 – Implementation of ADS – B (Out) Exclusive Airspace within Colombo FIR, for Aircraft Equipage Mandate and other information.